APA – The most popular citation style in the world?

A brief history, from the very first guidelines on up to APA 7 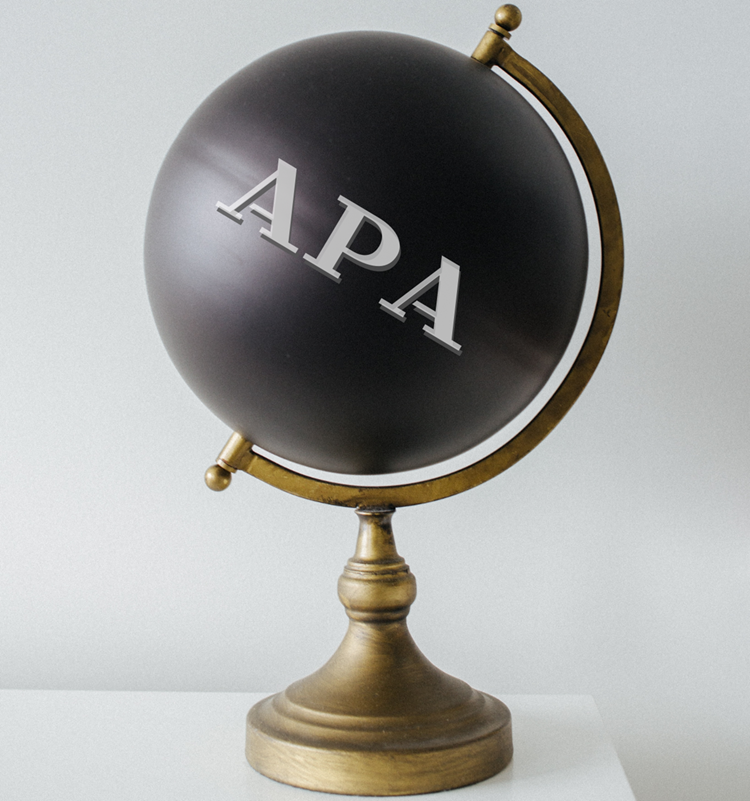 The APA citation style just might be the most widely-used citation style in the world. Since 1952 the various editions of the Publication Manual of the American Psychological Association have sold a combined total of 15 million copies. The manual has been officially translated into 13 languages with prominent adaptations and unofficial translations in many others.

So, just how did one citation style manage to become so popular, not just in the professional organization where it was first drawn up, but around the United States and then throughout the world?

The dawn of in-text citations

It may be hard to believe, but there once was a time when there were neither in-text citations nor bibliographies. Up until the 1900s, aside from some experiments, citations in scholarly publications were found in footnotes only. But footnotes took up a lot of space and made typesetting more difficult, which meant increased printing costs. So, in the early 1900s, some journals in the sciences began placing short citations with the author’s last name and the year in the text (Connors, 1999).  The full source information for these short in-text citations was then found in a bibliography at the end. Outside of the United States, this system came to be commonly referred to as “The Harvard System”, probably due to a visiting UK scholar who then brought the system back home (Chernin, 1988). In the U.S. it’s usually referred to as the author-date system. Whatever the name, this method became so popular in the sciences that hardly any journals in these fields use footnotes any longer, although many have since moved to a numerical system of in-text citations.

The beginning of the 20th century also saw increasing attempts to create formalized style guidelines  for journal article submissions. Prior to that, most authors formatted their footnote citations however they thought best in accordance with the traditions in their respective fields. There were a number of reasons for this shift: a marked increase in the number of scholarly publications and article submissions, new fields in the social sciences that wanted to be seen as “objective” and “scientific”, professional associations that wanted more legitimacy, and efforts to increase the readability of articles (Connors, 1999).

The first version of APA style

All of these were some of the reasons behind the APA citation style coming into existence, but there were others as well. As APA blog writer Anne Breitenbach (2016) explains, some of the main drivers behind publishing the first guidelines were “to save publishers money and time, as submitted manuscripts were often too long, inconsistently formatted, and wandered through their content. The authors were responding to a real need and genuinely trying to help would-be authors as well as improve the quality of the submissions.”

However, not everyone in the association saw this need. As their 1904 correspondence attests, two main figures were at odds regarding formalization: Edward B. Titchener, the head of the psychological laboratory at Cornell University, and James Mckeen Cattell, the editor of the journals Science, Scientific Monthly, and Psychological Review. In an argument that still has many adherents today, Titchener argued that requiring authors to pay painstaking attention to spelling and punctuation would destroy the aesthetic quality of writing. That argument was all well and good, but as a journal editor Cattell experienced firsthand the headaches caused by having to unify all this variation (Sigal & Pettit, 2012). As membership in APA grew and underwent increasing professionalization, Cattell’s view eventually prevailed and the first requirements were printed in 1929 in an issue of Psychological Bulletin, albeit with a note that “the committee realizes that it neither has, nor wishes to assume, any authority in dictating to authors, to publishers or to editors; but it suggests the following recommendations for use as a standard of procedure…” (Bentley et al., 1929).

So, did the original APA citation style use the author-date system? Well, first of all, there was hardly any guidance concerning citation. Most of the requirements were concerned with the form and content of the article as a whole. Information on citation only comprised 1.5 of the 7 total pages. And what guidance there was left things pretty open, to be frank. Readers could choose to either use the footnote system or in-text citations that either used numbers or presumably some form of short citation, although none is described, and in practice a number system was used (Connors, 1999, p. 229). The footnote system was listed first, however, and concrete examples were only given for footnote citations!

The move to an author-year system

Over the years, APA did slowly shift away from footnotes. Revised guidelines in 1944 prioritized the number system. But it was only in the 1950s that the APA style as we know it today really began to take shape. However, this shift almost didn’t happen.

This 1957 APA Manual is a fascinating little piece of work for the epistemological power struggle it seems to reveal. During the course of its preparation, the project coordinator, Chauncey Louttit, died and was replaced. The booklet was apparently already in press and, indeed, set in type, showing the older APA citation style (parenthetical boldface numbers in text and numbered list of references at end). But after Louttit's death, the Council of Editors, acting at the last moment, overrode his revision and printed his original pages struck through with black lines. Their contents have been replaced by tipped- in errata pages, numbered 28a, etc., that detail the "new" APA style (name/date in parentheses). The APA journals began to enforce the new style absolutely a year later. Why and how this occurred is lost in the mists of time, but it certainly looks like some kind of coup de style against the deceased editor (230)

One wonders what would have happened to APA if the book had been printed as planned. Would it have become as widely used as it is today? The timing was certainly right for the author-date system. Under the GI bill in the U.S., young men who had served in World War II were now entering college in droves. An easier system of citation was seen as a necessity (Connors, 1999, 233). This fueled the move both towards APA first in Psychology and then in other Social Sciences and MLA in the Humanities. Over time, both these citation styles would expand beyond their disciplines to be used more generally. Today, both are commonly used in undergraduate writing classes and many disciplines they weren’t initially intended for.

But why did APA get the edge? It was likely due to the field of Psychology becoming increasingly popular both in and outside of the academy as people dealt with the aftermath of the war. Enrollment was high in Psychology courses, as was membership in the American Psychological Association. These two factors ensured that APA spread widely. Adoption by other Social Sciences disciplines beginning in the seventies further expanded the style’s reach. Today APA style is the primary style used in the social and behavioral sciences, natural sciences, nursing, communications, education, business, and engineering.

To any student who has had to double and triple check the periods, commas, italics, and indentation of their bibliography entries, it may seem like their citation style guide is immutable. As an undergrad, you get your APA handbook and it seems like an overtowering system of rules that always existed and is unchanging. But that’s not the case at all, a fact that becomes evident when looking at the changes in the APA citation style over the years.

Although continued interest in Psychology and other Social Science fields has certainly helped as has the English-language dominance in these fields, APA’s lasting popularity probably also has to do with the fact that it keeps its guidelines updated to reflect the times. For example, in the 1974 edition, APA added a section on avoiding sexist language. This tradition continues today. In the 7th edition of APA released in October 2019, one major change was the endorsement of the singular “they” where gender is unimportant to the meaning of the sentence. Guidance on inclusive language was also expanded.

Of course, at least for students, it’s primarily the citation style guidelines that are of interest. So, what’s changed there?

In general, the 7th edition has simplified some of its rules and made them more consistent. For example, there used to be a rule that when citing a journal article, issue numbers were only to be included when pagination within a volume was continuous, a rule that understandably confused a lot of students. Now, issue numbers should be included all the time. Database names also no longer need to be included in bibliography entries, since most articles now have DOIs and since not all users will have access to the same databases. Another major change is that the place of publication no longer needs to be included for book sources.

The changing landscape of source types is reflected in a new section on the citation of online sources, which includes social media posts. You’ll now find examples for how to cite a Facebook post, a Reddit thread, a Tweet, and many more.

An overview of other major changes between the 7th edition and the 6th edition can be found on the mybib.com website. For a reference-by-reference comparison see the work-in-progress version of our “APA 6 vs. APA 7” PDF file here.

Is APA the future of citation?

Back in 1999 Connors wrote that “APA style now bids fair to become the de facto standard for all fields over the next five decades” (232). Could it sometime be the case that only APA is used for citation, all over the world?

It does seem that more and more journal publishers are moving to the APA system instead of continuing to have individual citation styles determined by each journal’s editorial team. Just last week, our style team discovered that 319 journals published by Wiley have now adopted the APA 6th edition style.

Universities have followed suit as well. In North and South America, it’s now commonplace for disciplines or even entire colleges or universities to adopt one well-known citation style, such as APA or MLA, rather than having different guidelines drafted by individual departments or professors.

This isn’t always the case in the rest of the world, however. For example, in Germany and the UK there are many “house” styles customized for a particular university, department, or even an individual course. Often, these house styles contain inconsistencies or a lack of detail. It can also be argued that the amount of time spent creating a new citation style could be better devoted to teaching or writing, since there are other experts out there who specialize in citation and already have given the matter a lot more thought. Why not simply use a time- and user-tested style like APA?

P.S. The APA 7 Style is already available in Citavi! Before you switch, double check whether your professor or advisor wants you to use this edition or to stick with APA 6.