8 strategies that can help 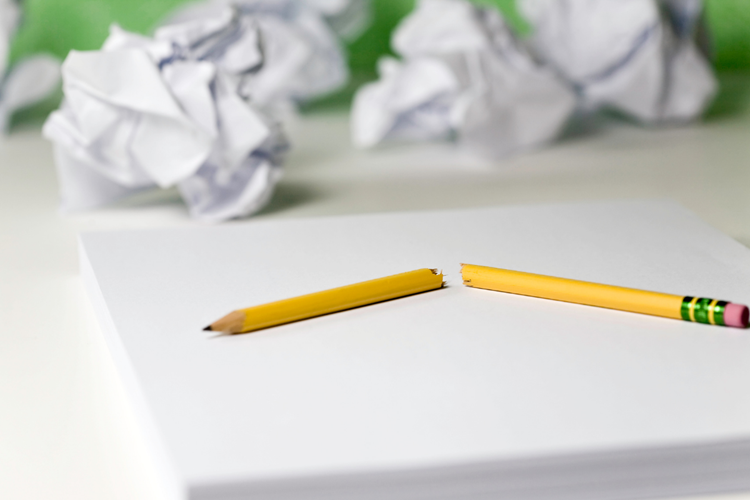 Nearly all of us have been there: sitting in front of the blank page not knowing where to start, a growing knot in our stomach and the temptation to get up and do the laundry instead, since then at least we’d be doing something useful.

In our last blog post, we wrote about #AcWriMo and speculated about why academics find it so difficult to write that they need the external push of AcWriMo to get them going. In this post we want to take a closer look at one of the biggest reasons – writer’s block – and possible solutions you can try if you experience it.

Writer’s block is indeed a common experience among academics. Although statistics are scarce, one recent study in Turkey found that only 6% of the first-year students surveyed never had writer’s block. 24% nearly always had writer’s block and 70% of students experienced writer’s block occasionally. Among graduate students in the U.S., it’s also common: a decade after starting 55-64% of PhD students still haven’t finished their dissertations (Ph.D. Completion Project as cited by Schuman 2014).

Although it’s common in academia, writer’s block is surprisingly hard to define. Some people even contend that it’s not real.

Does writer’s block even exist?

There’s a surprisingly large contingent of people who argue that writer’s block doesn’t exist. One popular quote attributed to the journalist Roger Simon states that “there is no such thing as writer’s block. My father drove a truck for 40 years. And never once did he wake up in the morning and say: ‘I have truck driver’s block today. I am not going to work’.”

Many in academia agree, including Dr. Paul Silva. In his popular book for academics How to write a lot, the psychologist contends:

While academic writing instructor Dr. Rachel Cayley admits that many graduate students have trouble writing, she thinks the cause lies elsewhere. As she sees it, “most graduate writers who are struggling with their writing are actually struggling with their thinking” (Cayley 2018). Cayley worries that mislabeling the problem as writer’s block can keep graduate students from feeling capable of doing the one thing that can help with working through the intellectual problems causing the block – writing.

Just because “writer’s block” as an overarching concept may not exist, that doesn’t mean that problems surrounding writing don’t.

There are many different flavors of writer’s block, and each person will experience it differently. According to those who have researched it, writer’s block can be caused by psychological, emotional, behavioral, biological or external factors.

Unfortunately, there aren’t a lot of well-designed scientific studies on writer’s block and the results from the few small studies that do exist can’t necessarily be extrapolated to the population at large. So what’s a sufferer to do? Flaherty (2004) explains that until science catches up, you will likely have to do a bit of experimentation to find out what works best for you, since “even treatments that clearly work well on average may not work well for a given person. The multiple aspects of block show how specifically tailored an effective treatment— behavioral or medical— should be” (140).

We’ve taken a look at some of the literature out there – from book-length treatises and Master’s theses to blogs and short articles and pulled out some of the advice that seems most promising for some of the most common symptoms. This list isn’t exhaustive, some of the categories below are very similar or overlap, and often you might experience multiple causes for a case of writer’s block. It might be worth trying a few of the options that seem closest to the problems you’re experiencing.

As an academic, not being able to write can be a very uncomfortable and emotional state. But, as the popularity of AcWriMo suggests, you’re not alone. We hope that some of the tips in this article will give you a starting point for breaking through your block, but if nothing seems to work, you can also seek help from trained professionals, such as your campus writing center or university counselors.

We’ll leave you with one last inspiring thought as well at the end: there is some evidence that writing regularly can help with writer’s block and that seasoned writers suffer less from writer’s block than inexperienced writers. So, no matter how hard the blocks seem now, they likely will get better over time.

What did you think about our tips? Did we leave anything out? How do you personally deal with writer’s block? We’d love to hear from you in the comments on the Facebook post for this blog article or by email.

Rachel Cayley. (2018, March 23). Writer’s block is not a struggle with your writing but with your thinking. Write your way out of it. https://blogs.lse.ac.uk/impactofsocialsciences/2018/03/23/writers-block-is-not-a-struggle-with-your-writing-but-with-your-thinking-write-your-way-out-of-it/